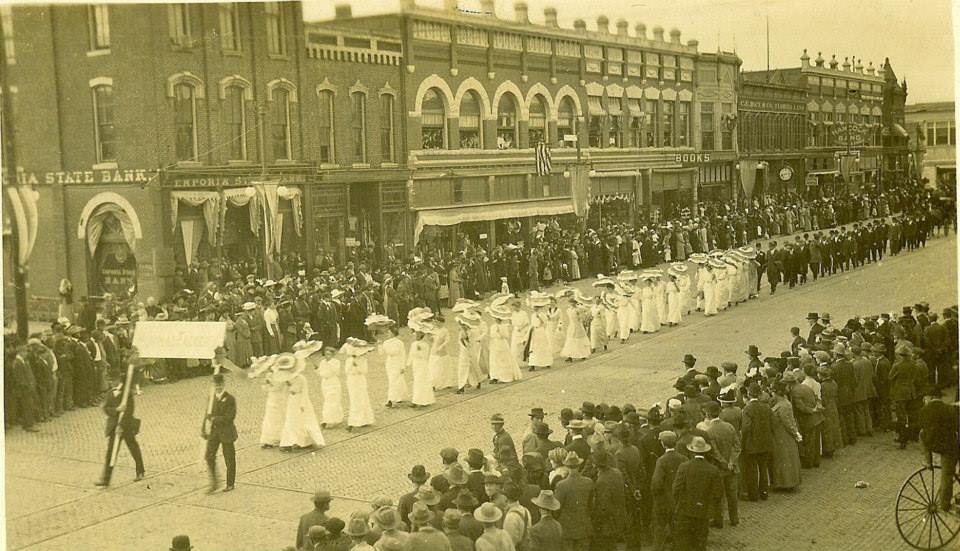 The town of Emporia was founded as a business venture in February 1857, according to well-documented town history. Kansas was a new territory embroiled in a bloody battle over slavery. Settlers were beginning to come into the territory when G.W. Brown, a young editor of The Herald of Freedom newspaper in Lawrence, saw a business opportunity to help himself and a change to help emigrants looking for a place to settle, according to a 1957 centennial-year history compiled by Robert Triplett. Many of the best town sites had already been settled by the winter of 1857, but Brown knew of one location that had not been taken. It had been described to him by a friend a few months earlier as “the loveliest site in the world for a town.”

The idea of a town company was born. Brown gathered together four other men – General G.W. Deitzler, a Lawrence resident; Lyman Allen and Columbus Hornsby, Lawrence merchants; and Preston B. Plumb, a Lawrence print foreman – and formed The Emporia Town Company.

Plumb, the only member of the company to eventually become a permanent resident, was selected because the men understood a basic principle of community development: they had to advertise their town in order for it to prosper. Plumb’s newspaper background was seen as essential for the new town. By June of that year he started Emporia’s first newspaper, The Kanzas News. It became the vehicle for early growth, and established the town’s newspaper tradition.

Emporia was founded on February 20, 1857, on an area of upland prairie, six miles above the junction of the Neosho and Cottonwood rivers. The site was in what was then Breckinridge County.

The Town Company had visions of a thriving and growing community. These hopes were so strong, Ted McDaniel wrote in “Our Land A History of Lyon County Kansas,” that the company decided to name the new town Emporia for a city-state in Northern Africa in ancient Carthage. Brown got the idea for the name while reading Rollins’ “History of the Carthaginians,” and noted the reference to Emporia, “a flourishing market center on the African coast and founded by the Greeks.”

Plumb would not begin to publish The Kanzas News for a few months, but Brown immediately began to promote the town through his Lawrence newspaper.

The promotion worked. The town began to grow and attract trade at once. Two thousand settlers came to Lyon County that year, according to Jacob Stotler, one of Emporia’s early settlers who wrote an early town history.

The original section of land was between Sixth and 18th Avenues and between West and East Streets of present day Emporia. Another half section was added the following year extending the south border to South Avenue. The town charter prohibited gambling and the sale of liquor on the town site. Thus, Emporia’s founders established not only a sound business, but the first prohibition town in the world, anticipating by 23 years the state prohibition amendment and by 61 years the 18th Amendment bringing national prohibition.

A good businessman must have the ability to predict the future market for his product or service. Perhaps Brown and Company were astute businessmen or simply fortunate to be in the right place at the right time. Most logically, it was a combination of the two. In either case, Emporia was founded just as the Kansas territory was receiving its first rush of settlers and the free state vs. slave state rivalry was at its peak. Both sides were trying to attract people into the territory to influence the 1857 vote, which would decide if Kansas would be a free or slave state. Certainly Brown through his newspaper, sympathetic to the free-state cause, was in tune to the political climate.

“Emporia at once began to grow and attract trade,” wrote early settler and historian Jacob Stotler. “Fortunately its affairs fell into the hands of a lot of energetic young men who came to lay all on the altar for the town.”

The tradition of community spirit has remained throughout the city’s history.

The first spring was a busy time. In May, Preston B. Plumb arrived to set up his printing office and made arrangements to have a printing press brought from Cincinnati. The Kansas News became one of the town’s first businesses. At that time, there were two buildings in addition to the unfinished hotel where The News was printed. The first building, a house on the northwest corner of Sixth and Commercial, was built by John Hammond, a carpenter who was recruited to Emporia from Ohio by Plumb.

The Town Company recognized the need to take care of visitors. The town’s second building was a hotel, The Emporia House, on the southwest corner of Sixth and Commercial. A store was the third building constructed on the southeast corner. Emporia House was the site of Plumb’s first publishing office until a newspaper office, the town’s fourth building, was built on the northeast corner of the intersection.

Plumb’s first issue of The Kansas News was published on June 6, 1857. It advertised the advantages of Emporia and called for a school teacher and mechanics of all kinds. The Town Company purchased 1,500 copies of the paper for distribution in the Eastern states.

According to that issue, saw mills quickly became established as the first industry. By June, a saw mill was operating six miles away near the junction of the rivers and it furnished the lumber for the building already on the town site. A second mill was operating on the Cottonwood eight miles above Emporia, and a third was under construction a half mile from town. A fourth large saw and grist mill with a lath and shingle machine was about to be constructed on the town site.

Other businesses were the hotel, A.G. Proctor’s store (which became the leading mercantile establishment in southern Kansas) and a second store was under construction. Charles Vernon Eskridge was the town clerk and general land agent for the Town Company.

“The country around here is fast filling up with an energetic, industrious and intelligent population who will develop the rich resources of this fertile region and make it the center of wealth and intelligence,” Plumb wrote about Emporia.

The newspaper was dedicated to the free-state cause. It also was through the paper that it became generally known that The Emporia Town Charter prohibited gambling and the sale of liquor.

Jacob Stotler, the print foreman for Plumb’s Kanzas News, credited the newspaper with much of the town’s early growth and development. The news not only provided information, but it served the role of an early day chamber of commerce.

“We do not exaggerate when we say that the regular appearance of The News during the first year of the history of Emporia did more to save the town and establish its firmness in the confidence of the people than all else put together,” Stotler wrote. “It betokened a faith and purpose which put down the croakers who prophesied that the town would fail. It inspired confidence in those already here, and induced others to come. Its suspension, even temporarily, would have resulted disastrously for the town; and its combined regular publication during that year was the greatest pecuniary sacrifice that has been made for the benefit of Emporia and this surrounding country.”

Despite the fast growth of the area that first year, the actual population of Emporia was only about 540 people, according to Roger Triplett’s centennial-year account. The town’s two greatest needs were water and railroads. The railroad solution came quickly.

The first railroad meeting was held as early as July 1857. Two projects were discussed, both of which were substantially adopted 12 years later. One was a rail line to run up and down the Neosho Valley, and a second from Topeka to Santa Fe, N.M.

During the first year, water was carried from the Cottonwood River in barrels. In the second week of May 1858, the town was saved by a well. John Hammond had been hired by Plumb to find water. He was successful while digging on Mechanic Street on the site of the present day civic auditorium. A reliable water source would return as a community problem many times over the years.

Another great need the first year was a post office. One had been established at Columbia three miles southeast of Emporia on the Cottonwood. The government refused to favor one for Emporia as long as one was as close as Columbia. When John Fowler resigned as the Columbia postmaster, the post office was moved to Emporia. H.W. Fick was the town’s first postmaster.

As 1859 began, The News congratulated the town in its New Year’s issue on the growth and general prosperity of the city.

“All its mechanical shops had plenty to do at good wages, “Stotler wrote. “There were four stores at that time, and they were profitable (the Proctor general merchandise store, the hardware store of Edward Borton, the Fick & Eskridge and the P.G. Hallberg stores). Several houses were in the course of construction, and seventeen lots had been donated by the town company for new buildings to be erected at once. More than fifty houses would be erected during the season.”

The much-sought-after county seat designation shifted among various towns until it was given to Emporia in an election in 1860 (some sources say 1862).

The first county government operated in Americus after it was named the county seat in 1858. The county-seat location was a major issue in the 1860 election and George Lillie of Neosho Rapids was elected to the legislature over that issue. Emporia was chosen as county seat by 155 votes over Americus. Thus ended the county seat war, according to histories written by Jacob Stotler and Laura French.

In 1870, less than 20 years after its founding, Emporia was beginning to think of itself as a young city. The arrival of the railroad the year before and the creation of the State Normal School in Emporia seven years earlier had drawn settlers, traders and new business to town. Emporia became a second-class city that year and adopted the council form of government. This governing structure continued until 1910 when a commission form of government was adopted.

The town had begun under the township’s jurisdiction and this continued until 1865 when a village government with a board of trustees was formed. In 1947, Emporia changed to its fifth and present form of government – city manager/commission.

Only a few weeks after Emporia was founded, hammers and saws could be heard. Emporia’s growth and development had begun almost immediately, and it has continued since then at a steady pace.

Mary Matheny, director of the Lyon County Historical Museum and authority on local history, said that the city was founded by businessmen and has been populated by leaders. All with a strong will to succeed. The town has had the normal lulls in development, and there have been some prosperous periods, although probably not considered booms. Generally, the years have simply produced good, sound, steady growth.